Contrary to what i thought (and what Wikipedia says below), the Shi-Nei/Univox Uni-vibe pedal which inspired the UniVibe effect in the Spark was not intended to emulate the “Doppler sound” of a Leslie speaker.
Japanese inventor Fumio Mieda has been inspired by Russian propaganda jamming japanese radios he was picking up

“He wanted to recreate the sound of radio waves bouncing off the atmosphere as he heard them as a child in Japan. Russian signals would phase across the airwaves and cause a strange “washing” sound. He simply wanted to replicate the effect.” (source: https://thejhsshow.com) 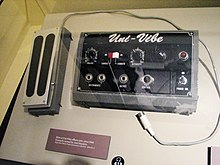 The Uni-Vibe, also marketed as the Jax Vibra-Chorus,[1] is a footpedal-operated phaser or phase shifter for creating chorus and vibrato simulations for electric organ or guitar. Designed by audio engineer Fumio Mieda,[2] it was introduced in the 1960s by Japanese company Shin-ei (at the time Honey) originally branded as the Vibra-Chorus. The effect (now named Uni-Vibe) was modified to have easier access to its fuse, and a speed control foot pedal was added. It was later released in North America by Univox in 1968.[1][3]

It is commonly thought the Uni-Vibe is intended to emulate the "Doppler sound" of a Leslie speaker. However Fumio Mieda revealed in an interview the effect was based on hearing radio signals (like Radio Moscow) undergoing “atmospheric modulation”. The effect has made its mark on tracks like Robin Trower's "Bridge of Sighs", Jimi Hendrix's "Machine Gun" and Pink Floyd's "Breathe".[3]

The effect, though often associated with chorus, is in fact created through a staggered series of phasing filters and an optical circuit utilizing LDRs (Light Dependent Resistor) and an incandescent bulb inside a light shield with a reflective interior, unlike the usually aligned filters of a normal phasing effect. Unlike most other phaser pedals, this is achieved without the use of op-amps.

The Uni-Vibe phase shifter was known for its throbbing, hypnotic pulse and lo-fi sweep. These unique effects set it apart from other modulation-type effects at the time.[1]

The Shin-ei Uni-Vibe was also sold as a Univox product.

As of 2020, "Uni-Vibe" is a registered trademark of Dunlop Manufacturing, Inc.[4]

Let us know about missing information
Contact Us
We use cookies on our website to give you the most relevant experience by remembering your preferences and repeat visits. By clicking “Accept”, you consent to the use of ALL the cookies.
Do not sell my personal information.
Cookie settingsACCEPT
Manage consent