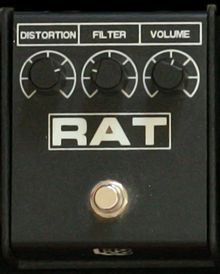 The Pro Co "The RAT" is a distortion pedal produced by Pro Co Sound. The original RAT was developed in the basement of Pro Co's Kalamazoo, Michigan facility in 1978.[1] Numerous variations of the original RAT pedal are still being produced today.

The pedal has changed in appearance over the years, but its tone has remained largely the same. Pro Co has also introduced variations of the RAT, including the Turbo RAT and the You Dirty RAT, among others.

The origins of the Pro Co "The RAT" can be traced back to the mid-1970s, when Pro Co engineers, Scott Burnham and Steve Kiraly repaired and hot-rodded existing distortion pedals, such as the Dallas Arbiter Fuzz Face. Burnham decided he could build a superior product from the ground up, and designed "The RAT" pedal.

In 1978, "The RAT" was being built as a custom-order product.[2] Only twelve of these pedals (including one prototype), commonly referred to as the "Bud Box" RAT, were produced. Each pedal was built in a standard project box, hand painted, and hand drilled. In 1979, Pro Co began mass-producing them.[2] This iteration was built in a custom designed, rectangular sheet-metal enclosure, with an L shaped removable top/back section giving access to the internals. The top panel was labeled with Pro Co Sound "The RAT" and the three control knobs as Distortion, Tone and Volume.

In 1983, Pro Co switched to a smaller, U-shaped enclosure. Finally, in 1988, the RAT2 was introduced, which included an on/off LED. Various RAT2 circuit board layouts and wiring configurations have surfaced in the last few years, including the noted "RAT3 version A and B" all under the RAT2 moniker. The RAT2 model is still available today, but in 2008 production moved to China and is now manufactured by Neutrik for Pro Co Sound.

Other models of RAT products include:[2]

The Pro Co "The RAT" is a distortion pedal with a quite simple circuit, which can be broken down into four simpler blocks: distortion stage, tone control, output stage and power supply.[2]

The design is based around a single opamp, originally the Motorola LM308 (switched to Texas Instruments OP07DP around 2002-2003). The distortion is produced using a variable gain circuit with diodes shorting the output to ground at a certain voltage level to produce hard clipping of the input waveform. Originally, 1N914 diodes were used, which were later replaced with 1N4148 since RAT2. The 'Turbo RAT' pedal uses red LEDs for this purpose (red LEDs have about a twice as high forward voltage as the original silicon diodes), while the 'You Dirty RAT' pedal uses 1N34A germanium diodes (clipping at a lower forward voltage).[2][3] The distortion stage is followed by a passive 'reverse' tone filter and volume control.

The general design is very similar to the Boss DS-1 distortion pedal. A major difference is the opamp used (the LM308). Known for its poor slew rate, it largely accounts for the sonic difference between the two pedals.[citation needed]

Versions of the RAT

Popular modifications to the RAT

The RAT is a popular pedal for modifying. Some of the possible modifications include:

Because of the RAT's popularity, numerous large and small pedal designers and manufacturers have attempted to replicate its sound as 'clones' or in new designs. Often the goal of these 'clones' is to capture the sound of vintage RATS at a more affordable price point. Many RAT clones allow users to switch between the different RAT circuits (Turbo, standard, etc) or between eras (Whiteface, LM308 Chip, Big box...). The simplicity of the circuit has also made it popular among pedal-kit manufacturers for first-time builders. Some examples of RAT 'clones' are: