Positive Grid Treadplate Amp is available under the Metal amp group and is inspired by the Mesa Boogie Triple Rectifier amp.

Mesa/Boogie (also known as Mesa Engineering) is an American company in Petaluma, California, that manufactures amplifiers and other accessories for guitars and basses. It has been in operation since 1969.

Mesa was started by Randall Smith as a small repair shop which modified Fender amplifiers, particularly the diminutive Fender Princeton. Smith's modifications gave the small amps much more input gain, making them much louder as well as creating a high-gain, distorted guitar tone. Prominent early customers included Carlos Santana, and Ron Wood and Keith Richards of The Rolling Stones. Exposure from these top players helped to establish Mesa/Boogie's position on the market, and it is frequently referred to as the first manufacturer of boutique amplifiers.[1]

Randall Smith was born into a musical family in Berkeley, California in 1946. His mother and sister played piano and his father was the first-chair clarinet with the Oakland Symphony Orchestra, played tenor sax, had a radio show and led a hotel dance band. Smith believes all of his early musical experiences taught him how to hear tone.[2]

As a young Boy Scout, Smith was interested in earning a merit badge in woodcarving. Stan Stillson, the Boy Scout leader became a mentor. Smith and Stan's son, Dave, were close in age. They became great friends and built ham radios together. Smith's father had a good friend, Ernie, who built hi-fi turntables and gave him a couple to experiment on until he was 11 or 12.[3]

He attended Miramonte High in Orinda, CA and graduated in 1964. During his freshman year he attended UC Santa Barbara, as his parents wanted him removed from the influences of Berkeley (20 minutes from Orinda). However, he would hop freight trains nearly every weekend from Santa Barbara to the Bay Area to see friends and return to the Beat coffee houses and bookstores of Berkeley. During the next four years he attended UC Berkeley studying humanities, English Literature and "invitation only" creative writing courses, where he mostly wrote accounts of riding the rails with various hobos, but never quite graduated. Most interesting is that he never once took an electronics course in high school or university. His first major electronics project was a scratch built Ham Radio transmitter using a 6146 power tube. At only around 60 watts, the signal still reached Alaska and most of the US.

Smith wanted to participate in the burgeoning San Francisco music scene, having been taught clarinet and a little sax by his father, but he took up drums, as it was the easiest to learn quickly. He played with a local blues and jam band and co-founded the band Martha's Laundry, which later morphed into Prune Music store, with keyboardist Dave Kessner. They opened the store in 1967 inside a building that had been a Chinese grocery store. He worked as a repair tech in the back while Dave ran the front of the store. Offshoots of Prune Music continue in Berkeley to this day with Subway Guitars, Sam Cohen (aka Fat Dog) and Guitar Resurrection in Austin, TX with former Martha's Laundry guitarist, Jim Lehman (aka Lizard Slim)[4] They were partners until 1975. Their store never generated a huge profit, but it became best alternative music store in the hippie scene.

Mesa/Boogie began with a practical joke: he borrowed a Fender Princeton (a small 12-watt amplifier) from his friend, Barry Melton of Country Joe and the Fish, and hot-rodded it by replacing the amplifier section with that of a Fender Bassman and installing a 12-inch speaker instead of the original 10-inch. The resulting amplifier proved to be loud and successful, and Smith made more than 200 of these Princeton "Boogies"—a name allegedly provided by Carlos Santana,[1] who is to have exclaimed "This thing boogies!"[5]

The Mesa name came about through Smith's other job, rebuilding Mercedes engines. Smith decided to set up Mesa Engineering so he could purchase wholesale parts for amps and engines.[1] He needed an official sounding name through which to buy Mercedes parts and building supplies, and chose Mesa Engineering. As the demand for his amps grew, Randall decided it would be best to move his workshop out of the storefront to get away from the distractions. He relocated to what was formerly a plywood dog kennel, then, eventually, to his home.[6]

Development of the Mark I

If hot-rodding Fenders was the first breakthrough, the second was developing an extra gain stage for the guitar input. Smith was building a preamplifier for Lee Michaels, who needed a pre-amp to drive his new Crown DC-300 power amplifiers. Smith added an extra tube gain stage to the preamp, with three variable gain controls at different points in the circuit (what is now called a "cascaded" design), creating the first high-gain amplifier. He set about designing a guitar amplifier around the new principle, and in 1972 the Mark I was released.[1]

He produced a number of custom variations on the Mark I through the late 1970s, with options including reverb, EQ, various speakers (most often Altec or Electro-Voice), koa wood jointed cabinets, and wicker grill. The Mark II was released in 1978.

As Mesa continued to grow, Smith moved the company to Petaluma in 1980. He ended up producing over 3000 amps out of his home workshop in the 1970s.[6] Throughout the 1980s, Mesa continued to produce combo and head amplifiers, and began production of rack power and pre-amps, developing power amplifiers such as the M180/190 and Strategy series, as well as pre-amps such as the Quad and Studio. Other models developed in the 1980s included the Mark III, the Son of Boogie, and the Studio .22. The Rectifier series was first produced in the early 1990s as a close copy of a Soldano SLO, a similar copy being a Peavey 5150, and quickly became a staple of modern rock guitar tone. Mesa has continued to introduce new models in the 2000s and 2010s, with models such as the Road King II, the Lone Star and Lone Star Special, the Stiletto and Express lines along with lower watt versions of its large amps, such as the mini Rectifier, and the Mark V:25 and Mark V:35.

On January 6, 2021, it was announced that Gibson had acquired Mesa/Boogie.[7] As a result of the acquisition, 75-year-old Smith joined Gibson as "Master Designer and Pioneer of Mesa/Boogie and beyond." 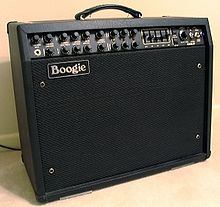